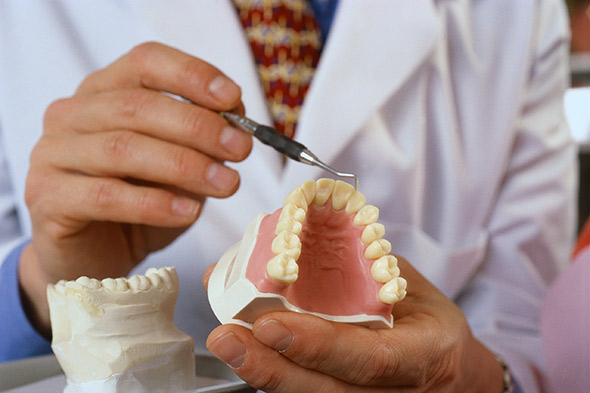 Periodontics is an area of dentistry that focuses on identifying, preventing, and treating periodontal, or gum diseases. Gum disease typically begins with gum inflammation, called gingivitis, and progresses into more serious issues from there, leading to pain, irritation, and even bleeding.

Periodontal disease can manifest itself in a variety of ways, all of which should receive attention before they worsen and begin to cause more serious problems, and eventually result in the actual loss of teeth.

Some of these warning signs of periodontal disease include:

If you are suffering from any of these problems, it is recommended that you schedule an appointment as soon as possible. If your periodontal disease is caught quickly enough, Dr. Gilbert and his staff can keep your smile intact and healthy.

Studies show that oral cancer claims more than 8,000 lives in the United States each year. Annual oral cancer examinations are absolutely necessary to identify and treat this disease in its early stages, before it has the chance to develop into a truly deadly problem.

When oral cancer starts, it may not show any of the usual cancer symptoms, which makes a thorough examination all the more critical to identify it early on. Oral cancer comes in multiple forms, the most prevalent being squamous-cell carcinoma, or SCC. SCC appears most frequently in the tissue of the lips and mouth. A few other areas that oral cancer may commonly appear include the tongue, throat, gums, and face.

Also known as non-surgical periodontal therapy, or deep cleaning, scaling and root planing is a periodontal procedure meant to clean out etiological agents, such as plaque and tartar, and is one of the most effective methods of preventing gum disease from developing and progressing.